Okay, so you have probably already seen this in email form, but I just got it and it was the first time that I saw the pictures. It's pretty amazing. I have not been able to find anywhere online that says this was a hoax, only some difference of opinion of exactly where it occurred. 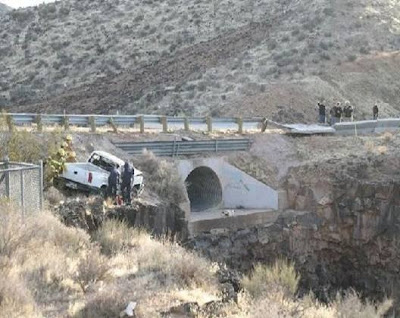 Look at the picture above and you can see where this driver broke through the guardrail, on the right side of the culvert, where the people are standing on the road, pointing.

The pick-up was traveling about 75 mph from right to left when it crashed through the guardrail.

It flipped end-over-end bounced off and across the culvert outlet, and landed right side up on the left side of the culvert, facing the opposite direction from which the driver was traveling.

The 22-year-old driver and his 18-year-old passenger were unhurt except for minor cuts and bruises.


Now look at the second picture below...

I would say this driver and passenger had a very good day.

Email ThisBlogThis!Share to TwitterShare to FacebookShare to Pinterest
Labels: Fun

Well, snopes says it's true .. it happened in December 2006 in Utah...
http://www.snopes.com/photos/accident/culvert.asp